The former president of Sinn Féin Gerry Adams expressed his full support for the President of Esquerra Republicana Oriol Junqueras, and former Minister Raül Romeva, as well as for “the struggle of the Catalan people”. “You know you have our full support. The bonds between the Catalan and Irish peoples in their struggles go back a long way,” Mr Adams told the Esquerra Republicana leaders.

Adams recalled that he himself had been imprisoned for Christmas, “and it’s not a nice place to be.” “But I hope that by knowing that you are in the right will be a small consolation for you. And when you look back, you will see these days as almost a necessary part of the struggle to achieve the freedom of your people,” he said.

The meeting was also attended by Declan Kearney, Sinn Féin National Chairperson and Junior Minister in the Northern Ireland Executive, who also wished to express his solidarity with the pro-independence prisoners as well as with “all those being persecuted and who have experienced the injustices of the Spanish State,” offering Sinn Féin’s support in the resolution of the conflict. Mr Kearney stressed the need for the Spanish government to recognize the gestures of the independence movement and to return to the negotiating table, adding that “they have clearly neglected their responsibility to continue the necessary negotiations in the current political situation.”

Mr Junqueras thanked Mr Adams and Mr Kearney for their support, saying it was “very important” to them and for “the joint struggle for human rights and democracy.” In the same vein, Mr Romeva expressed his wish to meet soon to share their common struggles. “Thank you for your solidarity and support, we look forward to going to Dublin soon to embrace and close ranks in our common struggle for democracy and self-determination,” he said. 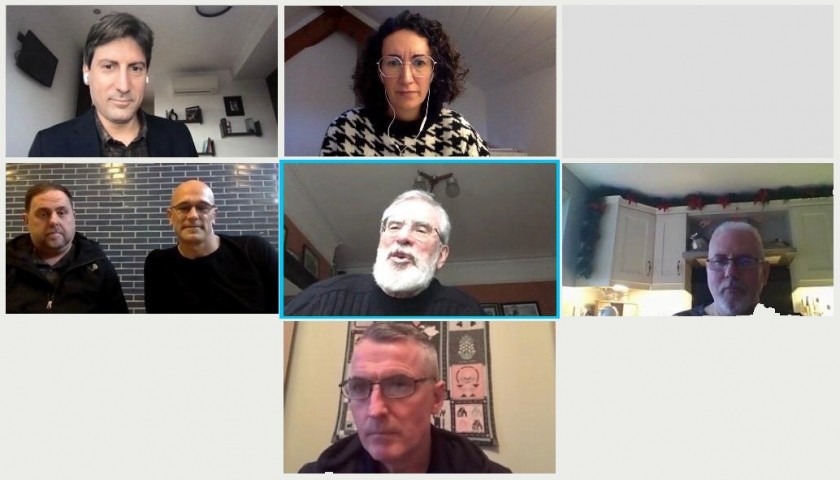 In another telematic meeting a few days later, former President of Uruguay, Pepe Mujica, also conveyed “all his solidarity” with the President of Esquerra Republicana Oriol Junqueras and former Catalan Minister Raül Romeva after Mr Junqueras sent a letter to the Uruguayan leader. “I am a friend of all those who are imprisoned for political reasons,” Mr Mujica told the Esquerra Republicana leaders.

Mr Romeva expressed his wish to meet soon and thanked Mr Mujica “for all the support you have always given us.” In the same vein, Mr Junqueras expressed his thanks for “this show of solidarity.” “We have always shown sympathy for the causes for justice and liberty in Latin America and throughout the world. Our struggle is also one with the democratic struggles of many other peoples,” invoked the leader of Esquerra.

Pepe Mujica stressed during the conversation that in times of harsh conflict “there is no other way than the political way,” and for the Uruguayan leader this means “always negotiating.” He also conveyed to the Catalan leaders his “humble” disposal “to help with a negotiating table with the Spanish state.”

The former Uruguayan president finally reminded them that he himself had spent many Christmases alone. “I know what that is, and that is why I have in mind all political prisoners.”